The following is a timeline of anti-police activity from the triangle area in the last few months. We assembled this to help folks in digesting this recent period, connecting the dots of various, seemingly disparate kinds of activity, and strategizing about future efforts. This list is most certainly incomplete, and we would welcome any additions with links, pictures etc., which can be sent to triAanarchy@riseup.net .

Aug 15th – The Chapel Hill Police Headquarters is vandalized by a group of anarchists claiming solidarity with prisoner Luke O Donovan, incarcerated for defending himself from homophobic violence in Atlanta, Ga, and with the ongoing uprising in Ferguson. Police cars are smashed out and spray-painted.

August 22nd – Over 100 people hold an angry rally and proceed to march down Franklin St. In solidarity with the riots and protests in Ferguson. In response to a column in the Daily Tar Heel condemning the anger and tone of the protest, a piece is released online and in paper several days later that defends the protest. 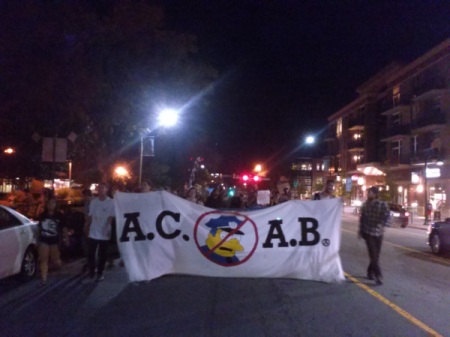 October 17th – Some “bull city anarchists” glue locks at the Durham National Guard Armory and leave messages painted on the building, declaring “Disobey Orders. Solidarity with Missouri Rebels. Fuck the Police.” In an anonymous communique, those responsible declare, “To those who train at this facility, we would encourage you to think now about what it would mean to fire on your own neighbors and community members. Some of the most courageous soldiers in history have been those who disobeyed orders and refused to squash a popular rebellion. How will you be remembered when that time comes? Which side are you on? If it was your son or daughter murdered by the cops, what side then?”

October 22nd – As part of a traditional, national day of action against police brutality, a small march and protest takes place at the downtown Durham jail.

November 18th – Spirithouse organizes a “court mob” as part of ongoing solidarity with Carlos Riley, Jr., a Black man accused of shooting a cop in the foot during an altercation with police.

November 24th, 9pm – The prosecutor in charge of the Grand Jury in Ferguson, MO announces that there will be no charges filed against Darren Wilson. Within an hour both St. Louis and Ferguson are rioting. Hundreds surround the police station, cruisers are attacked, small riots spread throughout both cities, groups of fifty or a hundred fire shots at police, and over 20 buildings are set on fire. The country as a whole explodes over the next 48 hours, with hundreds of cities and towns staging protests, many of which succeed in blocking major bridges or highways.

November 24th – Over 100 people gather to express sorrow at the decision and rage towards the police at Peace and Justice Plaza in Chapel Hill.

Nov 25th – After a week and a half of promotion, with a twitter handle set up (@NC4Ferguson) to spread the word and handbills and posters distributed in neighborhoods all over the city, a diverse group of over 200 people convenes at the Durham library. After 30 minutes of impromptu speeches and discussion, the crowd marches into downtown, setting off fireworks and pulling objects into roadways. A yuppie restaurant is spray-painted along with the downtown jail. The crowd eventually makes its way onto NC 147 with chants of “One, Four, Seven,” and blocks the northbound lanes for a half an hour before marching back into downtown and screaming “We Remember” at riot police stationed outside DPD Headquarters. 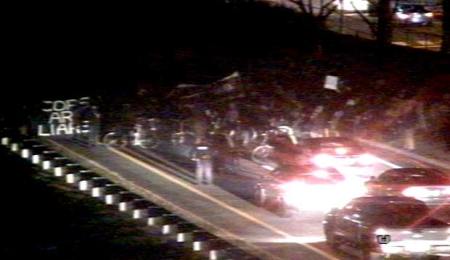 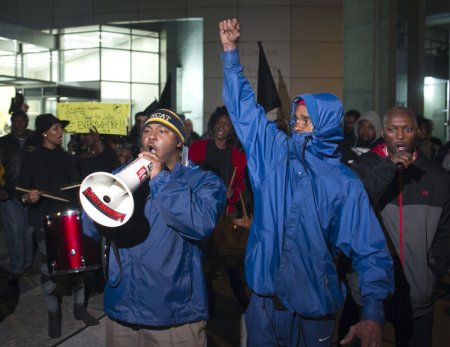 November 25th – 100 people gather in Moore Square in Raleigh for a vigil and speak out.

November 26th – With National Guardsmen now on the streets of Ferguson assisting in repression, Durham’s National Guard Armory is vandalized again, with 19 windows smashed out and messages left in solidarity with rioters across the country.

November 28th – Local organizations from the triangle stage a protest and die-in at the Crabtree Valley mall in Raleigh. There are 11 arrests.

December 3rd – After far less deliberation than the Ferguson decision, a grand jury in New York refuses to charge police officer Daniel Pantaleo in his murder-by-choking of Eric Garner, despite the event being captured on video camera in broad daylight. This adds more fuel to the flames of the constantly unfolding protests, civil disobedience, riots, and blockades that have spread around the country. Oakland has not stopped rioting since Ferguson’s non-indictment of Wilson nearly two weeks ago.

December 4th – A crowd of over 100 marches in Raleigh to the Federal Building.

December 5th – After just 48 hours of promotion by handbills, twitter and other social media, around 400 people gather at CCB plaza in anger at the police. Forty five minutes of impromptu speeches by people of color is followed by nearly 3 hours of marching around downtown, which gridlocks the city and forces the city to pull its entire active duty force to the area on three separate occasions. The march seeks to disrupt events at DPAC, successfully stops both sides of NC 147 for hours, leaves anti-cop messages spray-painted around the city, and clashes with officers on multiple occasions. There are ultimately 31 arrests. 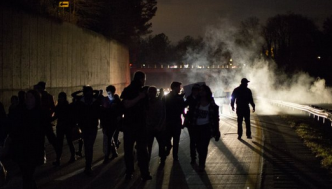 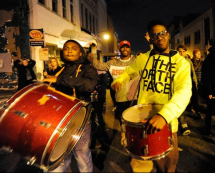 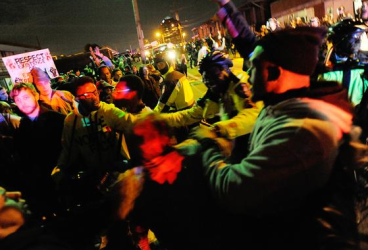 Dec 8h – In an interview with ABC11, Durham’s Mayor Bell mentions that he has declined an offer by the State to send in the National Guard if protests continue.

December 10th – Police in Sanford, NC kill unarmed Travis Faison in his home. The context remains unclear; afterwards, the cops refuse to let his mother view the body. The family later burns furniture in their yard and street as protest.

December 10th – 100 students chant “I Can’t Breathe” and stage a die-in at the UNC School of Medicine. A similar protest takes place at the same time at Duke University.

December 10th – A small march and die-in blocks streets outside of Southpoint Mall, disrupting access to I-40. A small conflict breaks out after a large truck attempts to drive over protesters lying in the road. Ten protesters and the driver are arrested, though police release the driver later without charges.

December 10th – A speaking panel at a bar in downtown Durham titled, “Why Fuck the Police?” brings out over 60 folks.

December 13th – A small group of about 50 people marches from the Northgate neighborhood to Ninth St. Police charge the march near a 147 on-ramp, and there are 11 arrests.

December 14th – About 75 members of four different Black congregations hold a small march and block intersections while in prayer in East Durham.

December 16th – WNCN releases a DPD internal report on police attempts to control December 5th protest. Media, police, and local politicians join forces to try to shift the focus onto outside agitators and anarchists, blaming a a general “anarchist mentality” held by protesters. A statement by arrestees to the media contests this divide and conquer strategy.

December 18th – About 50 people disrupt a city council meeting in protest of police repression and violence.

December 19th – Southerners on New Ground leads a protest of around 60 folks at Durham PD headquarters.

December 23rd – A small group of protesters met at the American Tobacco Campus, then reconvenes at Renaissance Center shopping plaza (across from Southpoint Mall) and disrupts business with chants and brief die-ins at Nordstroms and Old Navy.

December 25th – A Durham police officer injures his wrist when diving for cover after two men spontaneously approach and open fire on him.

December 29th – An unidentified man shoots at an officer’s home in Durham, shattering a window.